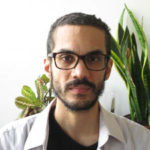 Fred Lyra is a musician and philosopher based in Paris where he teaches and writes for different publications. He is concluding his PhD in philosophy at the University of Lille where he works on an interdisciplinary subject between improvisation and politics. He has a master’s degree in musicology from the Paris-Sorbonne University where he works in the music of Steve Coleman as a bridge to conceptualize a philosophy of improvisation. He had taught music and Brazilian culture at the Universities of Lille, University of Rouen and University Paris 13.

Alípio Carvalho Neto, Brazilian-Portuguese saxophonist, composer, poet, educator and scholar dedicated to interdisciplinary music studies. Based in Rapolano Terme (Siena), he works across a broad spectrum of musical idioms. His albums have been released by Clean Feed Records, Creative Sources, Dodicilune, among others. 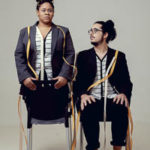 More than a performance for two interpreters who sing, play several instruments (including unconventional instruments and live electronic remixes) and that dialogue with interactions with the audience, SH is a portrait of the feelings that end up being repressed within each one; the onomatopoeia (“shush”) that makes us shut up as a title. Based on the lives of the interpreters / authors, the generating particles of the compositions are autobiographical. Surama and Henrique have versatility as their main characteristics, and they start from this to make the sound as faithful as possible to the ideas that pass through their minds. Most of the instruments are played by them on the recorded bases, in addition to using clippings from old recordings deconstructed from electronic processing. The live performance uses overlaps of loops, samples and interactions with the audience to expand the duo’s sound. The SH project is in the process of recording its first album.
Photo credits : Luara Olívia

One of the winners in the Novos Talentos do Jazz 2017 contest, promoted by 3 major Brazilian festivals, Ítalo Sales is part of the new generation of musicians in the country. He has accompanied artists such as Elza Soares (BRA), Áurea Martins (BRA), Maestro Spok (BRA), Rogério Tutti (BRA), Rachel York (USA), Elio Pace (UK), Anna Fegi (PHI), among others. He released his first album in 2017, Dorsal, featuring 9 new compositions by the guitarist. Soon after he released two singles: Tema Para Leavitt, in trio, and Superlua, a duet with the Brazilian drummer Hugo Medeiros. Ítalo is now at home, in the coastal city of Recife, preparing his next album and spreading only sounds during the isolation period.

Gilú Amaral is one of the most creative brazilian percussionist of his generations. The artist is son of Olinda, place of important brazilian popular culture, folkloric and religious manifestations. He expresses his talent and deepening of his musical studies by exploring different percussive and melodic instruments from different places, conducted by the catalytic capacity of the contemporary and regional percussion. He had played with Naná Vasconcelos, Renata Rosa, Mundo Livre S/A among others, and he is founder of the Orquestra Contemporânea de Olinda and Wassab trio.