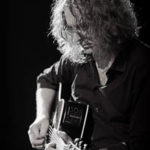 After two decades of world touring, five solo albums, and stunning collaborations including over 90 albums of credits, Tim Motzer continues to “traverse manifold territories in music” (Guitar Player magazine). Tim is widely known for his distinct textural acoustic-electro guitar voice utilizing looping, bowing, electronics, and prepared techniques. He has collaborated with numerous musical luminaries including David Sylvian, Burnt Friedman, Jaki Liebezeit, poet Ursula Rucker, King Britt, Jamaaladeen Tacuma, Vernon Reid, David Torn, Markus Reuter, and Pat Mastelotto, among others. Since 2016, Tim has toured the world playing prestigious venues and jazz festivals with Bandit65, an improvising trio he co-leads with guitarist Kurt Rosenwinkel and drummer Gintas Janusonis; their most recent release, Searching the Continuum (Heartcore Records), received a rare five-star review from J.D. Considine in DOWNBEAT magazine. His film/TV credits include the hit HBO series True Blood as well as Miami Vice, a major motion picture directed by Michael Mann. As an in-demand, solo live composer/improviser in the world of modern dance, Tim has played to sold-out houses in Tokyo, Japan; Seoul, South Korea; Oujda, Morocco; Philadelphia, PA; and Toronto, Canada. He currently serves as faculty in the University of the Arts School of Dance in Philadelphia, where he has worked for over a decade as a musical co-creator alongside master choreographers. He also has a longstanding collaboration with legendary choreographer Manfred Fischbeck, as part of Group Motion Dance Company.

For the past 20 years, Tim has brought his dynamic, eclectic array of musical projects together under his own 1k Recordings imprint, which has over 40 releases and counting. He composes, records, and produces his own solo and collaborative work, along with projects for other artists. For more info about 1k, please visit 1krecordings.com 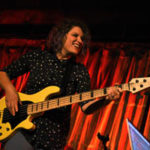 Julie Slick is a virtuouso bassist and composer known for her wide array of unique tones and substantial melodic invention. Throughout her career, she has developed a distinctive voice through international performances and recordings with acclaimed first-class musicians in both the progressive rock and jazz communities. She is most recognized as Adrian Belew’s bassist for the last 14 years and has released original music with her own bass duo-fronted band, EchoTest. 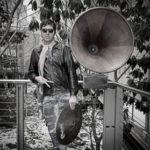 “Jeremy Carlstedt reflects the influence of his mentor Chico Hamilton with a touch of Elvin Jones; he’s the kind of drummer who makes sure you always feel the pulse even when getting a little tricky around the edges.”  That Music Magazine

New York City based drummer/songwriter/vocalist Jeremy Carlstedt, known for his dynamic style, organic feel on the drums and musical intuition, has performed with some of the most forward-thinking artists in jazz, rock, electronic and world music.

As a protege of the legendary Chico Hamilton, Jeremy has absorbed music history in the best possible classroom: on the bandstand as a member of Hamilton’s group Euphoria as well as Vincent Chancey’s Phat Chance, Brian Settles and Central Union and a new duet with Tim Motzer, which have put him on some of the world’s most prestigious stages including, The Kennedy Center, Lincoln Center, Newport Jazz Festival, Syracuse Jazz Festival and Roulette.

“Jeremy will become one of the giants in the music world.”  Chico Hamilton

With more than a dozen releases to his credit, Jeremy’s first solo recording, ‘When I Wake Up’ an art-rock EP featuring his drumming, vocals and compositions, was released in October 2012 on 1k Recordings.  His latest, ‘Stars Are Far’ was released in November 2015 and has received acclaim from many well-known art music publications. 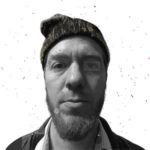 Doug Hirlinger is a percussionist, composer, producer, and educator currently based in Philadelphia. Since first moving to New York City from his hometown of St. Louis in 1995, Doug has been a resident of both NYC and Philadelphia multiple times, moving from one city to the other more than once, immersing himself in the deep and rich music scenes of both communities. He is an active performer on the drum set and has appeared throughout the United States and Europe with many musicians and ensembles of note including The Philadelphia Orchestra, Matt Mitchell, Ralph Bowen, Gene Perla, Joel Frahm, and Rudresh Mahanthappa.

Doug is increasingly interested in intersections between technology, activism, improvisation, and sound/music. In 2019 he completed an artist residency at the Kimmel Center for the Performing Arts resulting in a 10-piece suite exploring gentrification, inequality, and musical legacy in Philadelphia with collaborators Ursula Rucker, M’Balia Singley, Tim Motzer, and John Swana. Doug creates electronic music under the name Man From Nowhere as well as under his given name.