Thinking About the Past and the Present Moment Part II

Thinking About the Past and the Present Moment Part II is a serie of Interviews conducted by Steve Rowland featuring Maxine Gordon, Camille Thurman, Louis Hayes, George Cables. 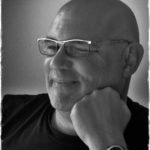 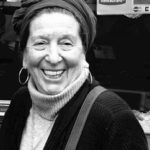 Maxine Gordon is an independent scholar with a lifetime career working with jazz musicians. As an oral historian and archivist in the fields of jazz and African American cultural history, her book, Sophisticated Giant: The Life and Legacy of Dexter Gordon (University of California Press, 2018) fulfills the promise she made to her late husband, jazz saxophonist and Academy Award nominated actor Dexter Gordon, to complete his biography.

Born in New York City, Maxine’s journey in the world of Jazz began as a teenager, when she and her friends would go to Birdland and the Village Vanguard to hear Miles Davis, Sonny Rollins, John Coltrane, Art Blakey with the classic Jazz Messengers group of Lee Morgan, Wayne Shorter, Jymie Merritt, and Bobby Timmons.

She began her career as a road manager for Gil Evans and then worked in Europe as a tour manager for groups and Festivals. She met future husband Dexter Gordon – famed saxophonist and actor — when a promoter sent her to assist him and his band make travel arrangements to Scandinavia after a train strike in Italy complicated their plans.

She earned a reputation as a savvy businesswoman, writing grant proposals and negotiating record deals for artists like Ahmad Jamal and Harry Sweets Edison. As longtime partner Michael Cuscuna once said “Maxine made the best deal I ever saw when she negotiated with Columbia for Dexter. I don’t know how she did that.”

She learned the business of recording by helping her close friend Shirley Scott (“Queen of the Organ”) by co-producing her album One for Me (with Harold Vick and Billy Higgins) for Strata-East Records. The friends were partners and collaborators until Scott’s death in 2002.

In 2013, Maxie and her son Woody Shaw III founded The Dexter Gordon Society, a nonprofit cultural organization created to preserve, document, and present their collective life’s work. She is also President of Dex Music LLC, which oversees Dexter Gordon’s copyrights and protects his name and likeness.

In November 2018, Sophisticated Giant: The Life and Legacy of Dexter Gordon was published by University of California Press to excellent reviews. 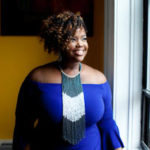 As a composer, multi-instrumentalist, vocalist, and unique interpreter of the jazz tradition, she is quickly becoming one of the standard bearers for the form, making a considerable and dynamic contribution to the legacy of jazz while paying tribute to its heroes.

Fluid and powerful on the tenor saxophone and highly inventive as a vocalist, she also plays the flute, bass clarinet, clarinet, and piccolo. Her rich sax sound has been compared to Joe Henderson and Dexter Gordon, while her vocal approach—including an impressive scatting ability—has been classified alongside those of Ella Fitzgerald and Betty Carter.

The New York City native has already amassed several distinctive honors for her musicianship: runner up in the 2013 Sarah Vaughan International Vocal Competition, two-time winner of the ASCAP Herb Alpert Young Jazz Composers Award and a winner of the Fulbright Scholars Cultural Ambassador Grant, The Chamber Music of America Performance Plus Grant (Sponsored by the Dorris Duke Charitable Foundation) among others. Thurman also has four full-length recordings as a leader to her credit.

Her compositions were featured and performed by her quartet in the ASCAP/The Kennedy Center “Songwriters: The Next Generation” showcase. Camille has appeared on BET’s “Black Girls Rock” as the saxophonist and flutist in the All-Star Band. Equally adept as a player and a singer, and recognized for her compositional abilities as well, Thurman has also earned accolades from the media, from Jazz Times to Downbeat, All About Jazz to the New York Times, NPR to Sirius XM Satellite Radio, BET to Jazz Night In America. 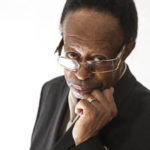 The career of Louis Hayes spans over 60 years of musical excellence and versatility. His current project is a nod to former mentor and friend Horace Silver with whom he began his career in 1956. His Blue Note CD, Serenade for Horace highlights many venerable compositions that Louis has re-worked to offer a fresh interpretation.  This CD was number 1 on Jazz Radio Stations around the country for 6 weeks.

Louis has been a member of many groups including Horace Silver, Cannonball Adderley , Oscar Petersen and McCoy Tyner.

He has led or co-led groups which included musicians such as Freddie Hubbard, Woody Shaw, Dexter Gordon, Joe Henderson and many more.

Louis Hayes is known as the quintessential bebop drummer.

For a more comprehensive look at his history, please visit his website at:www.louishayes.net 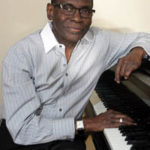 Born in New York City on November 14, 1944, George Cables was introduced to piano with classical training that began in his youth. When he started at the “Fame”-worthy High School of Performing Arts, he admittedly “didn’t know anything about jazz.” But he was soon smitten with the potential for freedom of expression he heard in art form.

A 1969 tour with tenor titan Sonny Rollins took Cables to the West Coast. By 1971 he became a significant figure in the jazz scenes of Los Angeles, where he first resided; and in San Francisco, where he lived later. Collaborations and recordings with tenor saxophonists Joe Henderson and Sonny Rollins (“Next Album:), trumpeters Freddie Hubbard and Woody Shaw (“Blackstone Legacy”), and vibraphonist Bobby Hutcherson showcased Cables’ wide-ranging keyboard skills. Demand for his sensitive accompaniment increased, and by the end of the 1970s, Cables was garnering a reputation as everyone’s favorite sideman.

Perhaps the most pivotal moment in his career was when hard-bop legend Dexter Gordon invited Cables into his quartet in 1977. The two years he spent with the tenor giant ignited Cables’ passion for the acoustic piano and immersed him in the bebop vocabulary. “I don’t feel that one should be stuck in the mud playing the same old stuff all the time, trying to prove that this music is valid,” Cables says. “We don’t need to prove anything. But I think you really have to be responsive to your heritage and then go on and find your own voice.”

The longest standing relationship Cables developed in the late seventies was with alto saxophonist Art Pepper. Cables — who Pepper called “Mr. Beautiful” — became his favorite pianist. Cables appeared on many quartet dates for Contemporary and Galaxy and joined Pepper for the extraordinary duet album, “Goin’ Home” – which would be Pepper’s final recording session.

George Cables has emerged as a major voice in modern jazz. He is currently performing and recording as a soloist with trio and larger ensembles, and as a clinician in college jazz programs. In addition to composing and arranging for his own albums, George Cables has contributed to recordings by Dexter Gordon, Art Pepper, Freddie Hubbard, Woody Shaw, Bobby Hutcherson and many others. He is noted for his fresh interpretations of classic compositions and for his innovative style of writing.