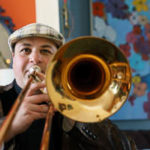 From the landmark experimental music venue Roulette to the Krakow Jewish Culture Festival, Philadelphia-native Dan Blacksberg has created a singular musical voice as a trombonist, composer, and educator. Acknowledged as the foremost practitioner of klezmer trombone in its traditional and modern forms and a respected voice in jazz & experimental music, Dan is known for a formidable virtuosity and versatility. This has led to performances with artists such klezmer masters Elaine Hoffman Watts, Adrienne Cooper, Michael Winograd and Frank London to experimentalists like George Lewis, Anthony Braxton, Marshall Allen, and extreme doom metal band The Body, to being a featured jazz soloist with the Chamber Orchestra of Philadelphia. Additionally, Dan has performed with artists such as Joe Maneri, Carmen Staaf, Danilo Perez, Miya Masaoka, Joe Morris, Thurman Barker, Kyoko Kittamura, Jessica Lurie, Burton Greene, and Tyshawn Sorey.

Described by Bandcamp Daily as “a maestro who effortlessly hops between—and, ultimately, deconstructs—genres with abandon,” Dan’s musical vision has led him to compose music with a wide reach. From writing danceable klezmer melodies on his most recent album Radiant Others – the first klezmer album to feature the trombone as the lead instrument – to the free-jazz of the Dan Blacksberg Trio, to genre-busting projects like his Hasidic doom metal band Deveykus and Name Of the Sea, commissioned by the Kimmel Center for the Performing Arts Jazz Residency, Dan forges music that “aims to infuse the fearless avant-garde with timeless sounds and techniques, and vice versa.” (WXPN’s The Key)

Dan currently teaches jazz and klezmer at Temple University, and coordinates the Instrumental and Dance programs at Yiddish New York. He is also in high demand as a teacher and workshop leader at many of the leading klezmer festivals such as Klezkamp, Klezkanada, Yiddish Summer Weimar, and was the 2020 Guest artist at Klezmequerque. 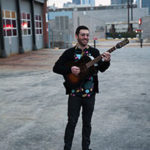 Nick Millevoi is a guitarist and composer whose music searches for the sonic cracks between jazz, rock and roll, noise, and modern composition. His band, Desertion Trio, featuring bassist Johnny DeBlase and drummer Kevin Shea, takes on the history of instrumental electric guitar music and throws it in a blender. The band’s sound has been described as “supremely weird desert noir” (Noisey) and “the sweet spot between Neil Young’s exploratory Crazy Horse jams and a spaghetti western soundtrack” (NPR Music). Desertion Trio has released three full-length albums on the labels Shhpuma/Clean Feed and Long Song Records, which have been lauded by outlets such as Downbeat Magazine, and JazzTimes, with Rolling Stone describing their latest release, Twilight Time as “warmly nostalgic and potently surreal.”

Nick was a co-leader of the power trio Many Arms, releasing five full-length records, including two for John Zorn’s Tzadik label, and was one half of the duo Archer Spade, along with trombonist Dan Blacksberg, which has performed composed works by Derek Bailey, Mick Barr, Roscoe Mitchell, Dave Soldier, Gene Coleman, and many others. Nick is a member of Moppa Elliott’s Unspeakable Garbage; has performed John Zorn’s Bagatelles as a co-leader of the Hollenberg-Millevoi Quartet (with guitarist Matt Hollenberg); was a member of Chris Forsyth & the Solar Motel Band, performing on their critically-acclaimed double-LP, The Rarity of Experience, as well as a member of Hassidic doom metal band Deveykus. In addition to these longer standing collaborations, Nick has performed with Mostly Other People Do the Killing, Dead Neanderthals, Nels Cline, Marc Ribot, Jamaaladeen Tacuma, Fugazi’s Joe Lally.

NPR Music says, “When Nick Millevoi plays the guitar, it’s like a rocket darting skyward between clouds.” Pitchfork has described his sound as “music that seeks the sun by exploding toward it.” Brooklyn Vegan calls Millevoi “an attacking chessmaster, tossing out chameleonesque scales and runs.” Millevoi’s music has been reviewed by Noisey, SPIN, NPR Music, The Onion AV Club, Wire magazine, and many others. 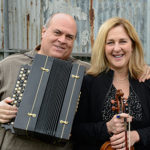 Cookie Segelstein and Joshua Horowitz, are founding members of Veretski Pass which offers a unique and exciting combination of virtuosic musicianship and raw energy that has excited concertgoers across the world. Playing in an unbound, energetic village style, this veteran duo plays Jewish Instrumental music of historical Eastern Europe; melodies from Ukraine, Carpathian-Ruthenia, Bessarabia and Rumania. Much of this rare music has been gleaned from field recordings gathered by the musicians themselves in over 14 countries spanning over 20 years. With its colorful instrumentation, unique arrangements and compositions, this seminal duo carries on the ancient tradition of klezmer musicians, playing music of all kinds, but with a recognizably Jewish sound.

Their music has won numerous awards, among them BBC’s Critics Circle award for best CD, the Belgian Gandalf Award for Best Concert and The Viennese Fritz Spielmann Award. They have twice been chosen as ambassadors representing traditional Jewish Music of Eastern Europe for the German World Exhibition of Klezmer History (Klezmerwelten) and have headlined the Jewish Music Festival of the University of London. They have been featured in concerts worldwide at the most prestigious venues, such as the Amsterdam Concertgebeouw and the Vienna Concert Hall and their CDs have repeatedly been on the 10-best recordings lists of journalists. Cookie’s unique Jewish violin style was featured for the Jewish wedding scene on HBO’s “Sex and the City” and Josh’s compositons provided the music for Jes Benstock’s award-winning  film “The Holocaust Tourist” as well as for the German TV series, “Berlin, Berlin.” 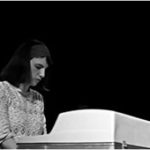 Composer Judith Berkson uses voice along with digital and analog keyboards to create pieces that cross the boundaries of classical, electronic, and experimental music. She has collaborated with the Kronos Quartet, City Opera, Laurie Anderson and has premiered vocal works by Chaya Czernowin, Enno Poppe, Mick Barr, Joe Maneri, Rick Burkhardt, Gerard Pape, Julia Wentz and Aleksandra Vrebalov. She has collaborated on Yiddish folk music with Theodore Bikel and has presented solo works at the Picasso Museum Malaga, Le Poisson Rouge and National Sawdust. Her solo album Oylam on ECM Records was described as “Standards and Schubert and liturgical music, swing and chilly silences, a beautiful Satie-like piece to open and close the record. I can’t get enough of it” (Ben Ratliff, New York Times). In 2012, she completed The Vienna Rite a chamber opera based on the collaboration between composer Franz Schubert and the Viennese cantor Salomon Sulzer during the 19th century, which premiered at Roulette Intermedium with costume and set design by Audrey Robinson. Her current work focuses on microtronal writing for acoustic instruments and voice. 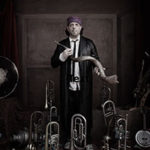 The Honourable Sir Frank London is a Grammy-award winning trumpeter-composer and co-founder of the Klezmatics. He composed and performed Freylekhs – Klezmer Fantasy for Trumpet & Orchestra at Central Park SummerStage. His Yiddish-Cuban opera Hatuey Memory of Fire (with Elise Thoron) premiered in Havana and at Montclair’s Peak Performances. He composed the poetry/dance/video/music work Salomé: Woman of Valor (with Adeena Karasick) which performed internationally. In 2019 alone, he premiered the song cycle Ghetto Songs at Hamburg’s Elbephilharmonie; co-created and music directed Carnegie Hall’s From Shtetl to Stage; presented Weill in New York at Dessau’s Kurt Weill Festival; and the created the spectacle In Dreams Begin Responsibilities for the New York Public Library.