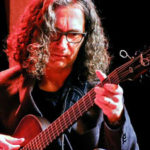 Barcelona, Spain native, and an NYC based since 2007, Oscar Peñas www.oscarpenas.com is a guitarist, composer, and arranger. Having spent formative years in Boston at the New England Conservatory and previously at Berklee, he is now a resident of Harlem, NYC.
Peñas has got the attention of programmers, critics, and audiences for his innovative music work. He has demonstrated his artistic style has released four albums as a leader featuring talented musicians; Esperanza Spalding, Gil Goldstein, and Paquito D’ Rivera. An unreleased album that was premiered at the BAM Next Wave Festival includes legendary bassist Ron Carter.
Peñas’ early steps followed his love for the bebop, nevertheless, after a very thoughtful conversation with pianist Cecil Taylor who advised Oscar to follow its passion and Spaniard roots, his suggestions made Oscar change the course of his career focusing on writing his originals crossing jazz with Brazilian music, hints of flamenco, and music that he admires.
Oscar’s musical creations are experiences that enrich his life and empower through collaborations, innovations, and a passion for artistic excellence. His intuition and ear drive him into an amalgam of melodies that aim for the unexpected, merging styles of music that do not attach to a single tag. Peñas is an independent multifaceted musician who had been performing at the best venues in the USA expressing his personal feelings through his original work, performing, and collaborating with his fellow jazz musicians and bandmates.
Passionate about community outreach, Peñas offered master classes to impoverished children invited by the Danilo Perez’s Foundation, in Panama City and the FeduJazz, at the Dominican Republic. 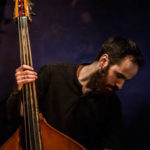 Manel Fortià,  www.manelfortia.com is an expressive and melodic Catalan born bassist based in, New York with a long career as an performer, improviser, and composer in jazz and modern music that has led him to play with great national and international figures such as Dave Liebman, Chris Cheek, Bill McHenry, Eliot Zigmund, Ari Hoenig, Arturo O’Farrill, Chano Dominguez, Stephane Belmondo, Antonio Serrano, Emilio Solla, Marc Miralta, Antonio Lizana… among many others.
Manel has also led his projects, including an acclaimed duo with the prestigious young pianist Marco Mezquida. His approach of extended techniques at double-bass and his creative experimentation combined with a huge melodic sense and deep sound has converted him into one of the most unique and original bassists of the new generation.
Fortià has played in many prestigious International Jazz Festivals and Jazz Clubs and has recorded more than 40 albums as leader and sideman, including ‘My Old Flame’ with Marco Mezquida, ‘Bulería Brooklyniana’ with Marques/ Fortia/ Pannier, ‘Beige’ with Sergi Sirvent Smooth Trio and ‘Les Crisalides’ with Sabina Witt.
Awarded with a scholarship by the prestigious Superior School of Music of Catalonia (ESMUC), where he graduated and had the opportunity to study with great masters such as Mario Rossy, Horacio Fumero, Andrew Ackerman, Agustí Fernandez, Lluís Vidal… and many others. Previously, he studied at Taller de Musics with the Grammy Awarded bassist Javier Colina, a master teacher, and mentor. 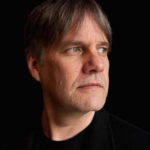 Carlberg has been involved in many crossover projects throughout the years. Some of his most notable collaborations have included performances and recordings with the likes of saxophonist Steve Lacy, trombonist Bob Brookmeyer, and trumpeter Kenny Wheeler. He has been commissioned to write music for big bands, small ensembles, symphony orchestras as well as modern dance companies. In addition to his playing and composing activities, Carlberg also serves on the faculty at New England Conservatory. He is also a partner in Red Piano Records, an artist-run cooperative label.
After receiving his Bachelor’s degree from Berklee College of Music in Boston, Carlberg received a Master’s degree from the NEC. While at the Conservatory, he came under the influence of jazz masters such as Paul Bley, Ran Blake, Geri Allen, and Jimmy Giuffre. The music and thinking of these musicians had a profound impact on Carlberg and set him on a path in search of personal expression.
Carlberg’s work consists of mostly original compositions. Jon Andrews describes the CD in DownBeat as “sophisticated, approachable music played with both freedom and discipline”. Carlberg is also known for his free improvisations, original compositions, and jazz repertoire reflecting his artistic development, as he began his extended quest in setting music to poetry.
Carlberg also dabbles in pointed political statements and uses cut-up versions of The Bill of Rights as well as pre-recorded looped parts. as his excerpt from Bill Clinton’s grand jury testimony during the Lewinsky episode at his State of the Union CD. 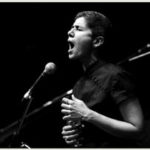 Avant-Garde vocalist Christine Correa www.christinecorrea.com is a native of Bombay, India currently residing in Brooklyn, New York. After relocating to the U.S. in 1979 to attend the New England Conservatory of Music in Boston, Massachusetts, she soon became involved in a variety of improvisational contexts. Christine has performed and recorded with artists such as Ran Blake, Steve Lacy and John LaPorta and has appeared at numerous festivals and clubs in the U.S., Europe, South America and India. Christine has also been featured on projects by composers Frank Carlberg, Steve Grover, Sam Sadigursky, Nicholas Urie, Guillaume Orti and Laurent Coq. Christine’s many other collaborators include John Hebert, Chris Cheek, Michael Sarin, Chris Speed, Ben Street, Kenny Wollesen and John O’Gallagher, among others.
In addition to the US, Christine has performed in Scandinavia, France, Spain, Africa, Switzerland, Poland, Morocco, Tunisia, Jordan, Israel, Argentina and India and at venues and festivals such as The National Center of Performing Arts (Mumbai), The Kennedy Center (Washington D.C.) and Finnish National Opera (Helsinki), Tribeca Performing Arts Center (NY), Rubin Museum of Art (NY), Symphony Space (NY), Jordan Hall (Boston), Jumo Jazz (Helsinki), Gdansk Jazz Festival (Poland), SIGMA Festival (Bordeaux), Span Festival (Nigeria), Jazz Yatra (India), Bordeaux Jazz Festival, Buenos Aires Jazz Festival, etc.
Christine is currently on the faculty at Columbia University’s Louis Armstrong Jazz Performance Program, Teacher’s College at Columbia University and the New School and has been Director of the Maine Jazz Camp since 1994. She has given vocal workshops at Sibelius Academy and Oulunkyla Conservatory (Helsinki), in Buenos Aires and Cordoba (Argentina), Lagos (Nigeria), Windhoek(Namibia), Bowdoin College (Maine), University of Michigan in Ann Arbor and Kalamazoo, among others. 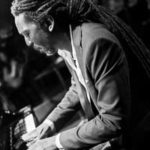 Born in the Pinar del Rio province of Cuba pianist and composer Elio Villafranca was classically trained in percussion and composition at the Instituto Superior de Arte in Havana (ISA), Cuba.
Since his arrival in the U.S. in mid-1995, has received the admirations of his public in 2014 Elio was awarded by the Preis der Deutschen Schallplattenkritik Nomination, German Records Critics, in 2010 Elio Villafranca was a Grammy Nominee in the Best Latin Jazz Album of the Year category. In 2008 The Jazz Corner nominated Elio Villafranca as the pianist of the year. That year, Villafranca was also honored by BMI with the BMI Jazz Guaranty Award and received the first NFA/Heineken Green Ribbon Master Artist Music Grant for the creation of his Concerto for Mariachi, for Afro-Cuban Percussion and Symphony Orchestra.
Over the years Elio Villafranca has recorded and performed nationally and internationally as a leader, featuring jazz master artists such as Pat Martino, Terell Stafford, Billy Hart, Paquito D’Rivera, Eric Alexander, and Lewis Nash, David Murray, and Wynton Marsalis among other. As a sideman, Elio Villafranca has collaborated with leading jazz and Latin jazz artists including Chick Corea, Jon Faddis, Billy Harper, Sonny Fortune, Giovanni Hidalgo, Miguel Zenón, and Johnny Pacheco among others.
In 2017 Elio Villafranca received The Sunshine Award, founded in 1989 to recognize excellence in the performing arts, education, science, and sports of the various Caribbean countries, South America, Centro America, and Africa.
He is currently live in the Bronx, New York City and he is a faculty member of Temple University, Philadelphia, and The Juilliard School of Music.