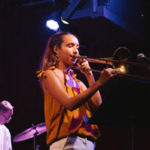 Kalia Vandever is a trombonist, composer, and educator living in Brooklyn, NY. She released her debut album, “In Bloom” in May, 2019 which features all of her original compositions written for quartet and duo with guitar. She has toured and performed locally in NYC with her quartet, as well as her solo project. She has performed in such venues as Carnegie Hall, Sydney Opera House, Walt Disney Concert Hall, Preservation Hall, the Hollywood Bowl, The Jazz Gallery, The Blue Whale, Dizzy’s Club Coca-Cola, SMOKE Jazz Club, the Blue Note, and the Rose Theater at Jazz at Lincoln Center. Kalia moved from Los Angeles, CA to New York City in 2013 to study at the Juilliard School where she received her Bachelor of Music degree in Jazz Studies. Kalia has played with the following musicians whom she admires greatly: Ingrid Jensen, Herbie Hancock, Tyshawn Sorey, Darcy James Argue’s Secret Society, Fabian Almazan, Wynton Marsalis and the Lincoln Center Jazz Orchestra, Joel Ross, Maria Grand, and others. She is also experienced as an educator, having traveled to Boston and Memphis, as a part of the Thelonious Monk Institute’s Peer-to-Peer Program; driven to inspire and motivate the younger generation of musicians. She’s also traveled to New Orleans with a group 18 students from the Juilliard School to teach at local schools, perform for the community, and build houses with Habitat for Humanity. She worked as an Academy Assistant for Jazz at Lincoln Center’s Educational Program called the Middle School Jazz Academy in 2016-2017. In summer of 2017, Kalia traveled to Santa Cruz de la Sierra, Bolivia to work with students in a youth orchestra. She currently teaches at the Brooklyn Conservatory of Music as a Trombone Private Instructor. 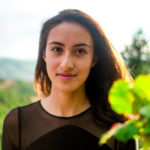 Maya Keren is a Philadelphia-raised pianist, vocalist, improviser, and composer currently pursuing a Bachelor of Arts in Music at Princeton University where she has studied with Kris Davis (2018) and Angelica Sanchez (2019 – present). With roots in the jazz idiom, Maya draws inspiration from free jazz, contemporary classical, and avant-garde improvised music traditions; her most recent compositions have bloomed out of the lush harmonic vocabulary of Olivier Messiaen and the spirit of Thelonious Monk. Most recently, Maya was recognized by the YoungArts Foundation, Yamaha Young Performing Artists, and the Jazz Education Network’s Young Composer Showcase and Sisters in Jazz programs for her work as a dual composer-performer. She has studied at the Kimmel Center’s Creative Music Program with Anthony Tidd and at the Banff Workshop for Jazz & Creative Music with Vijay Iyer and Tyshawn Sorey. She currently plays in Julien Chang’s touring indie-rock-psychedelic-jazz band and acoustic improvised duo Moon! Moon! with bassist Akiva Jacobs. 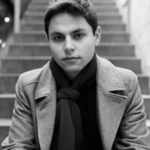 Joe Block is a pianist, composer, arranger, and bandleader. He began playing classical piano at the age of two before switching to jazz in middle school. While growing up in Philadelphia, he was fortunate to learn and study from older musicians on the scene and in jazz education programs at the Philadelphia Clef Club of Jazz, the Kimmel Center, and Temple University. Joe currently resides in New York City where he attends both the Juilliard School (MM ’22) and Columbia University (BA ’21). He studies with Frank Kimbrough, Ted Rosenthal, and Bruce Barth.

Joe has worked and played with many esteemed artists including Wynton Marsalis, Kurt Rosenwinkel, Leslie Odom, Jr., Ari Hoenig, Justin Faulkner, Eric Alexander, Jaleel Shaw, Hannibal Lokumbe, and The Captain Black Big Band. As a bandleader (trio and quintet) and sideman, he has performed around NYC and Philadelphia at venues including Dizzy’s, The Django, Birdland, Smalls, Smoke, Alice Tully Hall, Café Bohemia, Chris’ Jazz Café, South Jazz Parlor, @exuberance, and the Kimmel Center. He has also played at the Monterey, Belize, Montclair, Mid-Atlantic, and Telluride Jazz Festivals. Joe has received recognition and awards from the National YoungArts Foundation, Jazz at Lincoln Center, Telluride Jazz Festival, and the Next Generation Jazz Festival. In December 2018, he served as musical director and pianist for Wynton Marsalis’ annual holiday fundraiser and performance at Brooks Brothers in NYC. In December 2019, he played a weekend with the Kurt Rosenwinkel Quartet at Chris’ Jazz Café in Philadelphia, followed by a feature the next week in the Ari Hoenig Trio.

In addition to performing, Joe is an avid composer and arranger. Hailed by Jazz at Lincoln Center as one of “jazz’s most promising young composers”, he has been commissioned to write or arrange music for the Jazz at Lincoln Center Orchestra with Wynton Marsalis, the Philadelphia Ambassador Big Band, the Juilliard Jazz Orchestra, the Wynton Marsalis Septet, and the Jazz Orchestra of Philadelphia. As an educator, he has his own studio of students in arranging, theory, and jazz piano. 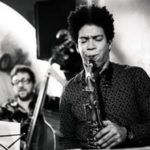 He was born on January 29, 1991 in the city of Camagüey, Cuba. In 2000, at the age of 9, he began studying at the Vocational School of Arts in Camagüey, obtaining excellent results and deserving awards and recognition in different competitions. In 2006 he began his professional studies at the Conservatory of Music of the city José White, also studying composition and orchestration. While in his second year at this school, he won the first prize in the International Competition for Young Jazz Players, JoJazz Habana 2008. After four years of study at this institution, he entered the Instituto Superior de Arte de la Habana.

During this time he collaborates, records and plays with the most important orchestras and groups in the country and with prestigious international formations, such as: Bamboleo (2013), NG la Banda (2014-2019), Issac Delgado (2015), Klimax (2016), Joaquín Betancourt and his Young Bigband (2017-2019), Diana Fuentes (2017), Danay Suarez (2019), Interactivo (2016-2019) , Yasek Manzano (2018), Horacio el Negro Hernández (2018), David Murray (2018), Denardo Coleman (2018), among others … He has also had the opportunity to play at the Jazz Plaza Festivals in Havana with Joe Lovano, Dafnis Prieto. He gave master classes with Steve Coleman, Anthony Tidd and the Muñequitos de Matanzas in Havana and Matanzas respectively. He has participated in Latin American music festivals in Latinoamericando Italy and in the European music awards with Jose Luis Cortes and NG la banda. He moves to the city of Madrid in 2019 where he collaborates with the CMQ big band, 23 collective, Roman Filiu Quartet and other projects on the jazz scene.