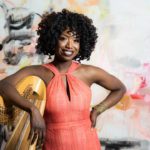 A leading voice of the harp today, performer, composer, educator and concert curator Brandee Younger defies genres and labels.  She has performed and recorded with jazz leaders and popular artists including Pharoah Sanders, Ravi Coltrane, Jack Dejohnette, Reggie Workman, Charlie Haden, Common, John Legend, The Roots and Lauryn Hill. In 2019, she released her fourth solo album Soul Awakening and her original composition “Hortense” was featured in the Netflix Concert-Documentary, Beyoncé: Homecoming. This same year, Ms. Younger was selected to perform her original music as a featured performer for Quincy Jones and Steve McQueens’ “Soundtrack of America”.  Ms. Younger’s ability to seamlessly inject the harp into arrangements and venues where it has historically been overlooked is a testament to her deep love for and exemplary command ofthe instrument. 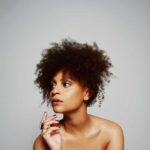 Sarah Elizabeth Charles is a rising vocalist/composer based in Brooklyn, NY. Her musical output and vocal sound has been described as a “genre of one” (DownBeat Magazine), “soulfully articulate” (NY Times) and “an unmatched sound” (Jay Z’s Life+Times). She has worked and studied with numerous world renowned artists and has led her band, SCOPE, for ten years. During this decade, Charles released three albums and is currently working on her fourth. As the active vocalist in a number of bands, including her own, Charles has released albums as a collaborator as well and performed at many venues throughout her career including The White House, Carnegie Hall, The Kennedy Center, and many more both domestically and internationally. In addition to her performances, Charles is an active educator. She works as a teaching artist with Carnegie Hall’s Sing Sing Correctional Facility and Future Music Project youth workshops, is an adjunct professor at The New School for Jazz and Contemporary Music co-teaching a course with Caroline Davis that she originally designed and they are constantly building upon called “Jazz and Gender” and is consistently developing an early childhood music education program with Rise2Shine, a non-profit organization based in Fond Parisien, Haiti. In 2019, she was one of five recipients of the Yale School of Music’s Distinguished Teaching Artist Award. One can only look to the future for more unique and boundary pushing music and art-centered initiatives from this one of a kind artist. 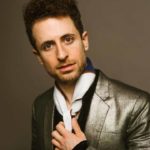 Pianist, composer and producer Greg Spero is one of the most captivating young artists to emerge on the creative music scene in decades. Heralded by the iconic Quincy Jones as “an absolutely beautiful human being and artist who knows how to play from his soul,” Spero is the mastermind behind the rhythmically-charged, groove-oriented and genre-bending SPIRIT FINGERS. The quartet features bassist Max Gerl, Dallas drum prodigy Mike Mitchell and Italian guitarist Dario Chiazzolino. Their riveting debut on Shanachie Entertainment was co-produced by Makaya McCraven, released in March 2018, and their long-awaited follow-up is due Summer 2020 on Ropeadope Records. Mentored by the legendary Herbie Hancock, Spero was the long-time pianist for pop singer/songwriter Halsey with whom he appeared on such national TV shows with as “Saturday Night Live” and “Ellen.”  Spero is also an alumnus of the Miles Davis Electric Band. At a time when a new generation of musicians are redefining the nature of jazz, Greg Spero is at the vanguard. 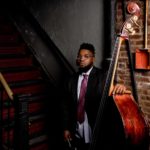 Nephew of the legendary drummer and composer, Walter Bolden (Nancy Wilson), andmentored by the late saxophonist, composer, and educator Jackie Mclean, Dezron attended theJackie McLean Institute of African American Music at the Hartt School of Music. Studying at Hartt offered him the opportunity to learn from and work with such notable jazz musicians suchas Nat Reeves, Steve Davis, and of course the great Jackie McLean.

His talent for music is not limited to the stage, or the recording studio. Acknowledging theimportance of technique, as a teacher, he encourages his students to embody the music,“understanding the emotion behind the music and being able to replicate that in the song”.Dezron has taught at The Artist collective in Hartford, is currently on the faculty for NJPAC JazzDepartment. He also gives workshops at various institutions in North America and abroad.

David Murray New Octet, as well Dezron was also a long-standing member of The CyrusChestnut Trio, among many other international ensembles.

His January 11, 2019 release , “ Black Lion ” a six-track EP is presented by a collection of like-minded – both musically and spiritually – friends and associates, who work to display thevisions and perspectives of the acclaimed bassist. Featuring Stacy Dillard and Lummie Spann on saxophones, Josh Evans on trumpet, David Bryant and Willerm Delisfort on piano and organ andJeremy “BEAN” Clemons on drums, “ Black Lion” was created to give Dezron the opportunity tolead a band with a personal story — Dezron’s vision — no frills attached. BLACK LION releasedtheir latest single “Solomon Grundy” featuring the new unit of Surya Botofasina on Organ and Synths, Willerm Delisfort on Piano and Rhodes, Aaron Burnett on Tenor Saxophone, and specialguests Chelsea Baratz and Dexter Pettiway on Tenor Sax and Drums respectively.

From the moment Dezron walks into a room, you feel his strong energy and without a word youfeel it from the first note.

You tube links for Dezron Douglas: